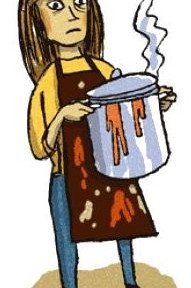 It took me until I was 33 to start cooking dinner.

Don’t get me wrong—I was no stranger to the kitchen. I had prepared laborious, extravagant meals before, often using exotic ingredients I’d learned about in magazines.

My sisters and I had bonded in the kitchen, spending visits preparing elaborate dishes together for hours. Cooking had been everything the food world told me it could be: a way to engage with a community, to travel without leaving home, to respect the local environment, to look after my own health. I nodded along with the eminences of the food world, convinced that their shared conclusion was the pinnacle of truth: Americans just don’t cook enough, and we desperately need to cook more. Our health, our civility, our culture depend on it!

And yet, even while espousing the ideals of the communal table and cross-cultural exploration, I rarely cooked dinner for myself in my 20s. Where was the fun in that? My sisters and I would groan to ourselves when my stepmother implored us not to cook Christmas dinner. (Her reasoning: It was too much work and we could just get Costco lasagna and be done with it.) But when left to my own devices, I would feed myself almost anything so long as I didn’t have to turn on the stove. If I had to hazard a guess, I’d say I cooked a meal once a week and otherwise made do with hummus and pita, or cereal, or crackers and cheese and olives. I liked to commune with the foodie writers but not enough to cook every day.

Which brings me to the dirty little secret that I suspect haunts every food writer: When you have no choice but to cook for yourself every single day, no matter what, it is not a fun, gratifying adventure. It is a chore. On many days, it kind of sucks.

I might have gone to my grave denying this fundamental truth if I hadn’t reported a book that had me living and eating off minimum wage (and less). While working at Wal-Mart in Michigan, I stocked up on bulk items, foolishly using middle-class logic (“great unit price!”) instead of working-class smarts (“save enough cash for rent plus small emergencies”). I soon ran out of money and found myself hungry and exhausted, staring down a pantry containing little more than flour, coconut flakes, a few scraggly vegetables, and two frozen chicken thighs. There was nothing about this scene that inspired me to cook. The ingredients were boring. There were no friends bringing over bottles of wine. I had left my glossy food magazines in New York.

But there would be no calling Papa John’s for pizza or stopping at Trader Joe’s for premade lasagna or a selection of fine cheeses; my $8.10 an hour precluded that. I had two choices: consume raw flour and cauliflower, or cook. By dint of my newfound poverty, I had lost the third option—the escape hatch, really—that most middle-class people take for granted: eating without having to cook. Once subjected to the tyranny of necessity, I found that making my meals from scratch wasn’t glamorous at all.

There are many good reasons to cook meals from scratch. Cooking simply at home from whole ingredients is often cheaper, per serving, than heading out to a restaurant—even a fast-food restaurant. Food made at home usually has far less salt and fat than either processed foods or what’s on offer in eateries. And, contrary to popular belief, families don’t save much time by turning to box meals like Hamburger Helper rather than cooking entirely from scratch. Researchers at UCLA found that, whether using processed foods or whole ingredients, American families spend about 52 minutes preparing their dinner every night.

So the big question is, if cooking from whole ingredients is so easy and cost-effective and healthy, why don’t Americans do it more—particularly the low-income ones who are affected the most by obesity? This is a much trickier question than it seems because it implicitly evokes two pernicious myths about Americans’ cooking habits that I uncovered in the course of my reporting.

The first myth here is that the poor do not cook. We tend to think that low-income Americans are flooding McDonald’s, while more affluent citizens dutifully eat better meals prepared at home. In reality, it is the middle class that patronizes the Golden Arches and its competitors. (That’s because fast food may be cheap, but it’s still more expensive than cooking at home.) Indeed, beneficiaries of the Agriculture Department’s food-stamp program (officially known as Supplemental Nutrition Assistance Program, or SNAP) typically spend far more time than other Americans preparing their meals. (This trend may shift in the future, as some states have begun allowing some subsets of SNAP recipients to redeem their food stamps for fast-food meals.)

The second myth is that cooking is easy. Making food quickly and well is easy once you know how to do it, but it is a learned skill, the acquisition of which takes time, practice, and the making of mistakes. To cook whole foods at a pace that can match box-meal offerings, one needs to know how to make substitutions on the fly; how to doctor a dish that has been overvinegared, oversalted, or overspiced; how to select produce and know how long you have to use it before it goes bad; how to stock a pantry on a budget. Without those skills, cooking from scratch becomes risky business: You may lose produce to rotting before you get the chance to cook it, or you may botch a recipe and find it inedible. Those mistakes are a natural part of learning to cook, but they will cost you and your family time, ingredients, and money without actually feeding you. They also make a persuasive case that cooking is not worth the trouble and that Hamburger Helper is worth the cost.

There’s not much acknowledgment of these truths in the current discussion about the benefits of cooking. Instead, we divide ourselves into two opposing camps—“those who cook” and “those who don’t care.” When the stories we tell about cooking say that it isonly ever fun and rewarding—instead of copping to the fact that it can also be annoying, time consuming, and risky—we alienate the people who don’t have the luxury of choice, and we unwittingly reinforce the impression that cooking is a specialty hobby instead of a basic life skill.

So here’s my proposition for foodies and everyone else: Continue to champion the cause of cooking, but admit that cooking every day can be a drag. Just because it’s a drag doesn’t mean we shouldn’t do it—we do things every day that are a drag. We take out the trash, we make our beds, we run the vacuum, we pay the bills. These are not lofty cultural explorations, but they are necessary, and so we do them anyway.

This reality check is exactly what’s missing from our discussion about our meals. At least, it’s what was missing from mine. Three years after my stint at Wal-Mart, I’ve gotten over the idea that cooking is fun—or that it is even supposed to be fun. Sometimes it’s not. It certainly wasn’t when I was working at Wal-Mart, especially that first night when I lurched my way around the kitchen and came up with a makeshift chicken curry with cauliflower and onion over biscuits. I grumbled to myself the whole time, but I ate well and physically felt good for several days after without spending an additional penny thanks to leftovers.

Today, my approach to cooking is completely flipped from my pre-Wal-Mart days. I now think of it not as a choice but as a chore—and that’s been oddly freeing. I no longer fret over what fabulous recipe I’ll make. I don’t try to psych myself up, to frame cooking as a fun event with which to entertain myself. (When I find myself whining internally about having to cook, I find the following phrase to be useful: “Suck it up, buttercup.”) I remind myself that I do all kinds of things that aren’t fun in the name of living a reasonably mature life, and then I cook something from scratch, just like the Mark Bittmans, Michael Pollans, and Alice Waterses of the world suggest.

One thought on “Cooking Isn’t Fun”