New Yorkers always want the best. And usually, we get it. We’ve got the tallest buildings, the tastiest street food, the lowest crime, the hottest ball teams. But when it comes to making sure poor people can stay afloat on meager paychecks, New York is not always at the top of the heap.

Our poor can get job training, tax breaks, health insurance and other resources to help them get by. We offer one of the nation’s most generous state tax credits for the working poor, and New York City just upped the ante by adding its own. We offer high-quality public child care. And two-thirds of qualified adults are enrolled in public health care programs–well above the national average.

As anyone who’s ever tried to get that kind of help can tell you, the problem isn’t that the programs don’t exist. It’s that there isn’t enough to go around. What aid does exist can be nearly impossible to obtain without professional assistance, and it’s generally earmarked for people already in “the system.” “There’s no way into these systems unless you’re on welfare,” says Barbara Zerzan, vice president for programs at WHEDCO, a Bronx organization that trains and supports low-wage workers. “Even if you’re eligible for a housing subsidy, you can’t get it. Even if you’re eligible for a child-care subsidy, you can’t get it.”

Diana Dorch could tell you a few things about that. Formerly homeless, the single mother of two made her way off of welfare and into a clerical position at a law firm. Today, her rent of $980 would eat up most of her monthly check of $1,575 if she didn’t have public housing subsidies. She and her children also get public health insurance, and she still gets some help with child care. Add food stamps and a tax credit for the working poor, and she’s just barely able to keep it together–though she’s not always sure it’s worth the trouble. “I don’t feel better to be working,” she laments. “I like my job and the fact that I earn money, but I’m within the same budget, actually.”

If Dorch is to move on up, what she needs, quite simply, is more money, and that takes higher wages. Moving up within the company is one option, but an increasingly rare one. “The idea of somebody going to a firm…and then moving up a career ladder in that firm is kind of old-fashioned,” says Diane Baillargeon, president of Seedco, a nonprofit that runs programs for low-wage workers. “That’s not the way the job market works anymore.”

The prospects for increasing pay for most low-skill work aren’t good, either. Efforts to raise the minimum wage have met formidable hurdles, and unions–the driving force that turned manufacturing into stable, middle-class employment–are struggling to survive, much less expand.

Since wages for low-skill jobs are unlikely to rise, it makes sense to train workers for higher-skill, better paying positions. In 1998 the feds created the Workforce Investment Act, the nation’s main education and job training program. Roughly four out of every five participants find jobs that last for at least six months–not bad. Yet it’s moved at a glacial pace, and funding has withered under the Bush administration.

Across the country, then, the working poor are finding it a struggle to earn more and live better. On the following pages you’ll find data from California, Illinois, New Jersey, Ohio and the U.S. overall. Is it any different in New York? In this town that thrives on excellence, we shouldn’t even have to ask that question. 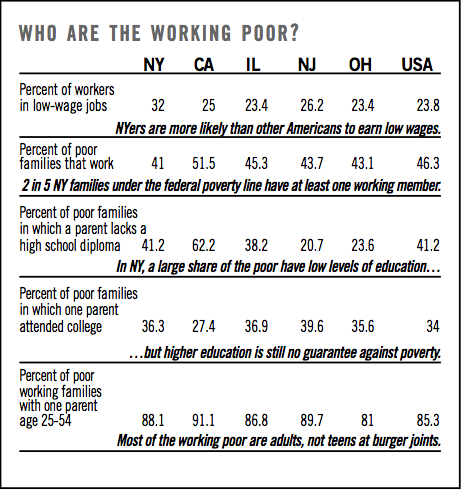 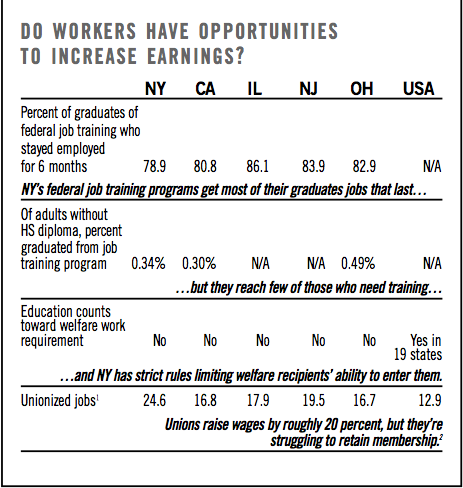 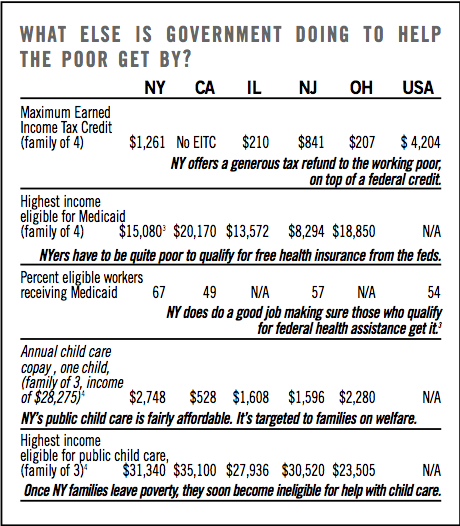 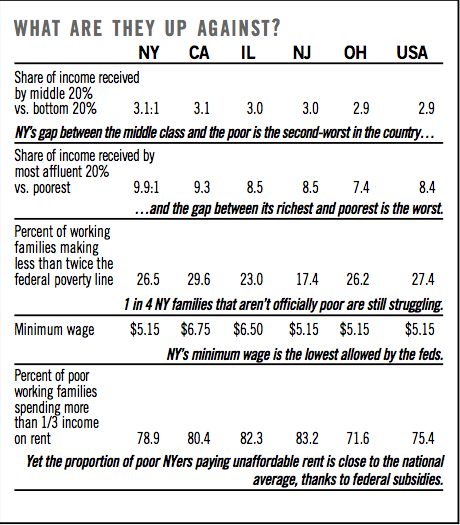