I first met author and foreign correspondent Annia Ciezadlo in New York City. Like me, she was a Midwestern mutt torn between the city’s seductive bustle and the airs it put on. It was the early 2000s, a decade before Ciezadlo published her stunning memoir, now out in paperback, Day of Honey: A Memoir of Food, Love, and War. The book chronicles her “honeymoon in Baghdad” in 2003, the months she spent there, and her subsequent move to Beirut, all the while working as a foreign correspondent alongside her Lebanese husband, journalist Mohamad Bazzi. (Like many Lebanese, Bazzi has family in Dearborn.)

I caught up with Ciezadlo while she cooked up greens and shallots to talk about what it’s like to move to the Middle East as an American woman — and how stories of daily life and meals tell us as much about a country as the tales of its wars. 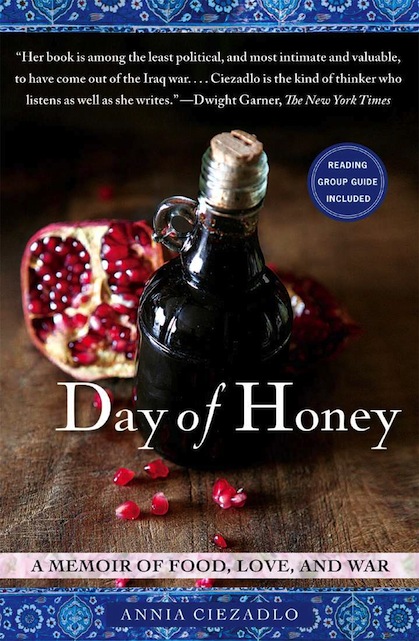 Metro Times: There are a lot of books about the wars in the Middle East, but Dwight Garner in the New York Times called yours one of the “most intimate and valuable to come out of the war in Iraq.” Why did you think writing about food and culture would be more valuable than doing a book on the politics of the region?

Annia Ciezadlo: I was writing a lot about politics and I was writing a lot of these sophisticated political analyses for National Journal and the Christian Science Monitor. [But] when I came back from trips in Baghdad, no-one wanted to know, “What do you think about the Iraqi governing council?” People wanted to talk about, “What does Baghdad look like? Where do they eat? How do they get around, do they ride donkeys?” That’s the stuff that people are actually interested in and that’s the stuff that makes people care about a country they can’t see.

That’s really abstract: The basic genesis of the idea is, I was looking at this giant pile of wild greens [on my counter], and I was washing dishes, and I was thinking about all this political stuff I write and how no one ever reads it. And I thought, “You know, Lebanon is really a lot like southern France, if I wrote a book about Lebanon that was like A Year in a Provence, I wonder if anyone would read it.” [laughs]

MT: Right, ’cause this is actually an incredibly personal book. It’s easy, looking at it, to say, “We’re going to learn about the Middle East and the culture and the history of it, but it’s actually a story about you going to the Middle East as an American woman, and learning about what it’s like there.”

Ciezadlo: I had this unprecedented access to daily life that most foreign correspondents don’t have. The vast majority of foreign correspondents in the Middle East don’t speak any Arabic at all, they don’t have any intimate relationships with ordinary people, they tend to hang out with the elite, particularly the English-speaking elite, and they don’t really have an understanding of private lives of everyday people. That’s something that I had this really unique point of view on, that really nobody else has, and so I realized that not to write about that would be crazy.

MT: One of the things that’s powerful in the book is when you’re talking about getting to know Mohamad, and you have this story of his mother saying, “What did I do wrong that all of my children are spread out all over the world?” How common that is that?

Ciezadlo: Thirty percent of all college-educated Lebanese have to migrate abroad to make a living; that’s a World Bank figure. That’s because Lebanon’s government is so corrupt and greedy, that most average Lebanese cannot afford to live in their own country; the economy there is such a mafia economy. My friend Bilal put it really well, he said that in order to be able to afford to live in Lebanon, you have to live in Dubai.

There were a couple waves of Lebanese diaspora that established these diasporan communities, the ones in Detroit, Little Syria in lower Manhattan, there’s a big community in Chicago, L.A. — and of course Dearborn, which is the mother ship. But a lot of people left during the civil war [1975-1990] thinking they would come back and ended up staying wherever they went. And my husband’s entire family did exactly this. And what we’re seeing now with Iraq. Almost everyone I knew from Iraq is either here or in Europe now.

MT: In the United States, both Iraq and Lebanon are known mostly for war, but in the book you really explore culture and history in those places; there’s one story about finding masqouf, fish that’s caught and grilled on the spot in Baghdad, and another about a legendary street full of cafes and intellectuals.

Ciezadlo: I hardly met any Iraqis who didn’t start quoting poetry almost immediately. People would bust out talking about ancient Sumerian and Mesopotamian history. People had this sense of owning their history and it being almost alive, and this is why things like the looting of the museums was such a big deal. And it wasn’t just the ancient stuff that got looted, by the way; almost nobody talks about this, but there was also a museum of modern art, and [Iraqis] have this amazing modern art tradition that isn’t really written about.

When professors started getting assassinated, that was really important to people there because they take education very seriously. This is a country that values reading and education; people will tell you very proudly that the alphabet was invented in Mesopotamia. (And people in Lebanon will tell you the same thing).

When I tell people that Iraq has a café scene, people are really surprised, because we only ever see images of things blowing up and people shouting, “All hu akhbar!” But there was this intellectual life there that was very vital and very important and it tends to be marginalized by the media. We have this mentality that “if it bleeds it leads.”

What I hear from editors is that people just aren’t interested in hearing about Iraq. Now, I don’t know if that’s true. I think Americans actually are interested in hearing about Iraq and the rest of the Middle East; I think they just want to hear about it in ways that they haven’t heard a million times before. I think it’s up to us as storytellers to tell stories in a different way, and that’s what I tried to do with Day of Honey.

MT: How did growing up in the Midwest prepare you for writing about food in the Middle East?

Ciezadlo: Being from the Midwest informed a lot of my Mideast explorations. I kind of grew up in Chicago and southern Indiana. I had exposure to this white ethnic cooking tradition which is hugely, hugely diverse, everything from pierogis on the Polish side to lamb stew and stuffed grape leaves on the Greek side. Those people are Midwesterners; are we going to say that only German, white-blond people are Midwestern? No. Obviously not. [In New York,] it became this question of, “What do you mean by Midwest?”

This gets back to this whole idea of seeing the hidden life of a place. Mohamad and I had this opportunity to have really amazing home-cooked meals with people. People will say these kind of funny things, like, “Palestinians don’t have good food.” And you say, “What about Gaza? Because my friend is from Gaza and she made this amazing thing.” And they say, “Oh, I didn’t mean that, I meant in Jerusalem.” When people make generalizations like this they’re usually not thinking about what they’re saying. So when I heard people say Iraqi food wasn’t good, immediately, this little red flag went up. I had heard New Yorkers say the same things about Midwestern food for years — for decades — and I knew it to be untrue. So that made me think, “I wonder what they’re missing.”