It’s been a while since welfare reform was news. When the federal law backing Temporary Assistance for Needy Families (TANF) expired in 2001, the chatter about what to change petered out as legislators merely extended the legislation for a few months. Since then, the same process–anxious expectation, legislative wrangling, stalling and ultimately a simple extension–has been repeated eight times. In the meantime, the subject of welfare has all but vanished from public debate.

Welfare will be back on the Washington agenda as early as March, when the current extension will expire. Freed from election-year concerns, an emboldened White House and Congress are poised to push through a Republican remake of the Clinton-era welfare law. Marriage promotion, faith-based programs and increased work requirements all promise to burden welfare recipients with more baggage as they strive for financial independence.

Yet the biggest victims of welfare re-reform may be not the recipients of cash assistance but those who are struggling not to need it: the working poor.

Many states, including New York, use a significant portion of their federal welfare dollars to pay for services helping low-income people work and improve their career prospects, including child care, job training and supportive housing. Now the proposed reforms to welfare will put costly new responsibilities on states. The feds want 70 percent of welfare recipients to be working, up from 50, and to work more hours each week. States will have to create or expand workfare programs simply to keep these welfare recipients employed, and spend more money to care for their children.

The Congressional Budget Office anticipates the new federal mandates will cost an additional $3 to $9 billion. Yet every reauthorization proposal put forth so far by the House, Senate and White House has kept welfare funding at its current level–about $17.2 billion. With these dollars diverted, states will have less funding for their programs supporting the working poor. 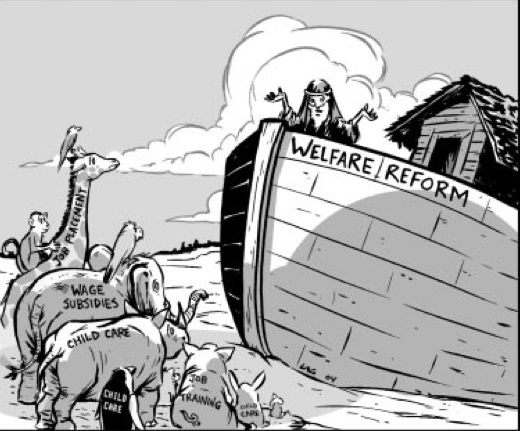 New York will be particularly crunched. Its Earned Income Tax Credit (EITC) is one of the most generous tax refunds for low-income workers in the nation, and it’s paid for with federal welfare dollars. Aside from basic cash assistance, the EITC represents the single largest expenditure of the state’s welfare funds.

The state EITC been a boon for Kimberly Paul, who left welfare in 2000. She started claiming the tax credit two years ago when she realized that she was eligible. “It was quite helpful,” says the single mother of one, who used the refund to pay off bills and buy clothing for her 9-year-old son. “It gave me back almost $1,000, the way H&R Block said it,” says Paul.

The Pataki administration has already proposed slashing spending for programs funded through TANF; the 2005 budget included $51 million in such cuts. Even the EITC, a bipartisan favorite, may have to get trimmed.

In state after state, budget cuts threaten to reduce already inadequate levels of funding, says Mark Greenberg of the Center for Law and Social Policy, a liberal Washington D.C.–based think tank. “Even if there were no changes in federal law, states will have to cut benefits and services over the next five years just to manage,” says Greenberg.

To meet the feds’ new demand to get more welfare recipients working, for longer hours, New York would have to spend much more than it does now. Currently, only 40 percent of New York’s caseload is working. Since one in three welfare reicipients is “indefinitely unengageable”–permanently unable to work–the city would have to find or create employment for every single able-bodied person on the welfare rolls–and a few disabled people, too.

Local officials are starting to notice that the new work requirements will take precious resources away from poor people who are already employed in the job market. “The work rates proposal will force states to concentrate their efforts on those receiving cash assistance,” contended Republican state Senator Raymond Meier, chair of the New York State Senate’s social services committee, at a federal reauthorization hearing. A proponent of supports for working families like the EITC, transportation subsidies and child care, Meier argued that the new requirements will mean that “the New York legislature will be forced to reallocate funds away from those essential programs.”

The budget stress will likely fall on workers like Kimberly Paul. She’s not sure what she would do if the tax credit and child care disappear. Says Paul, “It’s not like I can tell my son, ‘Don’t let your foot grow anymore, ’cause we can’t afford it.'”