It’s easy to gloss over the details in all the hubbub over the feature I just published with Slate and the Food and Environment Reporting Network, “Can Whole Foods Really Chance the Way Poor People Eat?” But I would encourage anyone interested in the nuts and bolts of food reporting to pay attention to the data set we amassed for the piece.

What’s the big deal with the data?

Comparing food prices between stores is phenomenally difficult to do well. Brand names, sale prices, different sized packaging…all of it gets very confusing, very quickly. The USDA does track food prices, but only at the bulk level—for a pound of green peas, for example. But most of us don’t buy just a pound of shelled green peas. We buy Green Giant, or we buy Cascadian Farmr, or we buy White Rose, with all the presumed differences between them affecting price. There simply isn’t anywhere that researchers can go, let alone consumers, to see a coherent comparison with name brands. Until now. END_OF_DOCUMENT_TOKEN_TO_BE_REPLACED

(1) “Everybody Was Talking About It”

A couple of years ago, as winter gave way to spring, Toyoda Ruff began to think about changing how she ate. Ruff had always been heavy, but her son, Tarik, a freshman honor student, had recently crossed the 300-pound mark, prompting Ruff to ferry him to appointments at a children’s weight loss clinic, 11 miles away in Detroit’s Midtown neighborhood, and to document everything he ate for two months. At 270 pounds, her husband, Jermaine Harris, wanted to slim down, too. Ruff was beginning to see her family’s weekly fast-food habit and visits to Golden Corral’s all-you-can-eat buffet as a problem.

As Ruff mulled over these changes, a friend cajoled her into joining a healthy cooking class at their church. Ruff was on medical leave from her job as a probation officer due to an injury, and the break gave her time to consider her meals. The more she thought about eating healthy, the more intrigued she was by a new store: Whole Foods, which had just opened in Detroit. “It was on the news. People were talking about it at church,” Ruff said. “Everybody was talking about it.” END_OF_DOCUMENT_TOKEN_TO_BE_REPLACED

On a gold-gray morning in Mitchell County, Iowa, Christina Dreier sends her son, Keagan, to school without breakfast. He is three years old, barrel-chested, and stubborn, and usually refuses to eat the free meal he qualifies for at preschool. Faced with a dwindling pantry, Dreier has decided to try some tough love: If she sends Keagan to school hungry, maybe he’ll eat the free breakfast, which will leave more food at home for lunch. END_OF_DOCUMENT_TOKEN_TO_BE_REPLACED

“As Common as Dirt” is the 2013 James Beard Award winner in the Politics/Policy/Environment category.

One morning earlier this year, in the borderland town of Brawley, California, 75-year-old Ignacio Villalobos perched on a chair in his trailer, removed a plastic bag from the well of a rubber boot, and finished dressing for work. Dawn was still an hour away, and in the wan light of the kitchen, Villalobos took off his house sandals and pulled the bag over his right foot. He bunched it at the ankle, then slipped his foot into his boot. END_OF_DOCUMENT_TOKEN_TO_BE_REPLACED

In the shadows of the elevated tracks toward the end of the No. 3 line in East New York, Brooklyn, with an April chill still in the air, Denniston and Marlene Wilks gently pulled clusters of slender green shoots from the earth, revealing a blush of tiny red shallots at the base.

“Dennis used to keep them big, and people didn’t buy them,” Mrs. Wilks said. “They love to buy scallions.”

Growing up in rural Jamaica, the Wilkses helped their families raise crops like sugar cane, coffee and yams, and take them to market. Now, in Brooklyn, they are farmers once again, catering to their neighbors’ tastes: for scallions, for bitter melons like those from the West Indies and East Asia and for cilantro for Latin-American dinner tables. END_OF_DOCUMENT_TOKEN_TO_BE_REPLACED

Part 3 of series, “Getting By”

Early this April, before the snow had completely disappeared, Milagros Espinal undertook an annual ritual, rustling her three children out of her Bronx apartment for a 15-minute jaunt over the Tri-Borough Bridge. Upon reaching Bayside, Queens, she hunched over an aging Hewlett Packard computer, consulting earnestly with her stepbrother, Veder Velarde. Between slurps of Coke, Milagros and Veder, who works in accounting, focused on the task at hand: painstakingly inputting figures from the receipts and 1099s generated by the child-care business she was running out of her living room. It was a late start for Milagros. She had hoped to finish her taxes months before, but now April 15 loomed just two weeks away, and she was anxious to dispense with the paperwork. END_OF_DOCUMENT_TOKEN_TO_BE_REPLACED

Part 2 of series, “Getting By”

It starts before Benita Andrews even makes it home. Five o’clock finds her walking to her South Bronx apartment, a ramshackle three-family covered in aluminum siding. Her kids–nine in all–spot her from their third-floor window, and they are already calling for her when she is half a block away. By the time Andrews passes the corner house, known as a drug spot, and a stoop blaring salsa music, her front stairs are lined with children. “It gets kinda crazy when I get home. Everybody’s all ‘Mommy, mommy, mommy.’” says Andrews, feigning irritation. “I about fall into a coma come 10:00.” END_OF_DOCUMENT_TOKEN_TO_BE_REPLACED

It starts before Benita Andrews even makes it home. Five o’clock finds her walking to her South Bronx apartment, a ramshackle three-family covered in aluminum siding. Her kids–nine in all–spot her from their third-floor window, and they are already calling for her when she is half a block away. By the time Andrews passes the corner house, known as a drug spot, and a stoop blaring salsa music, her front stairs are lined with children. “It gets kinda crazy when I get home. Everybody’s all ‘Mommy, mommy, mommy.’” says Andrews, feigning irritation. “I about fall into a coma come 10:00.”

So far, the only sign of exhaustion from Andrews is a deep breath before the onslaught from her children begins. “I want to be working, but there’s too many loose ends at home,” she says matter-of-factly. Asked what it would take for her to leave welfare, Andrews raises her eyebrows–I have tried and it does not seem possible, her look says–and ponders the question. “If I do Scratch n’ Match [a state lottery game], that might cover me for three or four years,” she says. Pressed for specifics, Andrews launches into a list. END_OF_DOCUMENT_TOKEN_TO_BE_REPLACED 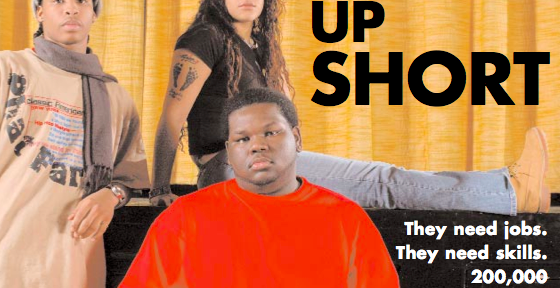 Part 1 of series, “Getting By”

That’s how many of New York City’s young adults, ages 16 to 24, are not working and are not going to school. Only a few of them are even looking for jobs. There are 200,000 in all–the approximate population of Richmond, Virginia.

There have always been young people for whom high school failed, and work was out of reach, but the sheer numbers have never been greater, according to new research from the Community Service Society of New York. The problem is not New York’s alone: The number of young adults whom policymakers call “disconnected” is surging nationwide. END_OF_DOCUMENT_TOKEN_TO_BE_REPLACED

Vanessa Santiago, 18 years old, giggles as she peers at the object of her glee: a garbanzo bean.

Tight jeans, a bomber jacket and a pink sweatband-Santiago doesn’t look like the type of girl to contemplate the aesthetics of legumes. But on this cold Saturday morning, she has come from Bushwick to lower Manhattan to inspect a can of beans. Standing in the middle of a commercial kitchen, Santiago and a half-dozen other teenagers cluster around a steel table, a ragtag bunch of critics. END_OF_DOCUMENT_TOKEN_TO_BE_REPLACED