One of Brazil’s largest supermarkets, Pão de Açúcar, has agreed to stop selling beef produced on deforested land or with forced labor by June 1. But while advocates hailed the announcement, they also questioned whether the retailer was being realistic about the promises it’s making. END_OF_DOCUMENT_TOKEN_TO_BE_REPLACED

Organic food has gone majorly mainstream, right? Wal-Mart has been driving down the price of organic with an in-house organic line. Whole Foods has begun experimenting with cheaper stores to catch up. And the increase in sales of organic food has dramatically outpaced that of conventional food. What’s more, 30 percent of shoppers report an interest in paying more for organic food — and a significant interest even in low-income neighborhoods. Given all that, it’s easy to assume that organic has become just as common in downmarket groceries as in upscale ones.

But a recent study in the Journal of Food Products Marketing suggests that the growth of organics might not be so diversified. END_OF_DOCUMENT_TOKEN_TO_BE_REPLACED

When Obama administration officials announce the nation’s first-ever goals for reducing wasted food Wednesday morning, most people probably think of donating surplus food to charity. But a new study from researchers at the University of Pennsylvania, Drexel University and Cabrini College suggests that part of the solution might be a little more tasty—and profitable: House-made ice cream, freshly fried veggie chips, and smoothies. END_OF_DOCUMENT_TOKEN_TO_BE_REPLACED

It’s easy to gloss over the details in all the hubbub over the feature I just published with Slate and the Food and Environment Reporting Network, “Can Whole Foods Really Chance the Way Poor People Eat?” But I would encourage anyone interested in the nuts and bolts of food reporting to pay attention to the data set we amassed for the piece.

What’s the big deal with the data?

Comparing food prices between stores is phenomenally difficult to do well. Brand names, sale prices, different sized packaging…all of it gets very confusing, very quickly. The USDA does track food prices, but only at the bulk level—for a pound of green peas, for example. But most of us don’t buy just a pound of shelled green peas. We buy Green Giant, or we buy Cascadian Farmr, or we buy White Rose, with all the presumed differences between them affecting price. There simply isn’t anywhere that researchers can go, let alone consumers, to see a coherent comparison with name brands. Until now. END_OF_DOCUMENT_TOKEN_TO_BE_REPLACED 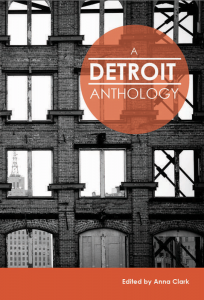 My essay, “Hungry Days in Detroit,” an homage to the year I spent living there while working on The American Way of Eating, has been included in this lovely new anthology, edited by the uber talented Anna Clark.

While much is written about our city these hard days, it is typically meant to explain Detroit to those who live elsewhere. Much of this writing is brilliant, but our anthology, this anthology, is different: it is a collection of Detroit stories for Detroiters. Through essays, photographs, poetry, and art, this anthology collects the stories we tell each other over late nights at the pub and long afternoons on the porch. We share them in coffee shops, at church social hours, in living rooms, and while waiting for the bus. These are stories addressed to the rhetorical “you”—with the ratcheted up language that comes with it—and these are stories that took real legwork to investigate. We may be lifelong residents, newcomers, or former Detroiters; we may be activists, workers, teachers, artists, healers, or students. But a common undercurrent alights our work that is collected here: we are a city moving through the fire of transformation. We are afire. END_OF_DOCUMENT_TOKEN_TO_BE_REPLACED

A longer version of this piece appeared on Medium.com; all published in conjunction with the Food and Environmental Reporting Network.

How much of Walmart’s revenue comes from its shoppers’ food stamps? The store isn’t required to say. But a January Court of Appeals ruling could change that. If the unanimous decision by the 8th Circuit’s panel of three judges holds, the United States Department of Agriculture will be required to release data indicating exactly how much of the Supplemental Nutrition Assistance Program’s $80 billion in annual sales is paid to specific retailers and individual stores. END_OF_DOCUMENT_TOKEN_TO_BE_REPLACED

You have likely heard many arguments against a Wal-Mart moving into Watertown – its effect on traffic, crime, property values and the flavor of our neighborhoods. And perhaps you’ve read about how Wal-Mart won’t really net Watertown much revenue – far less than originally imagined – and may even cost us money in the long run by boarding up local businesses and making our town less inviting for new investors and homeowners. END_OF_DOCUMENT_TOKEN_TO_BE_REPLACED

I don’t have much to add to the thoughtful comments from this (now-a-month-old) post, but love the data visualization.  What I would love to see someone do is a price/quality comparison between different stores, really get a handle on how much better (or not) nutrition and cost are based on geography. As I’ve mentioned before, supermarkets are a very crude metric for measuring food access.

The Whole Foods press release copy was pretty trite (“Frugal is the new black!”*) for this post about America’s cost-conscious consumption. But the actual content—findings from a WF-commissione survey of American’s shopping habits—was pretty striking. The poll of 2,100 Americans in August found:

Even more fascinatingly, in a four-city snapshot comparison between Whole Foods and local competitors, Whole Foods—on a market basket of 14 staples—beat out regular grocery stores on price.

Careful shoppers know this, of course. As I explore in The American Way of Eating, all grocery stores play with their pricing, taking a loss on some items and making a killing on others; its basic marketing. If one knew Whole Foods’ prices well, it would be very easy to design a market basket that was cheaper than at their competitors, which might explain why frozen strawberries (not fresh) and romaine hearts (not heads) sit on the list.

The other thing that struck me is another trend I noticed while working at Walmart to report the book: The dominance of private-label brands, which have mushroomed in recent years.

The biggest news from Whole Foods’ little survey, though, is that it sounds like Americans already care an awful lot about their food,. and say that price matters. That’s a far more realistic picture of our meals, I think, than we’ve seen in the past, and I, for one, am glad to see it.

*Can someone please do a video about two “New Blacks” (which sounds awful, like an obscure legacy of apartheid) having a smackdown about who is the REAL new black. Discuss.